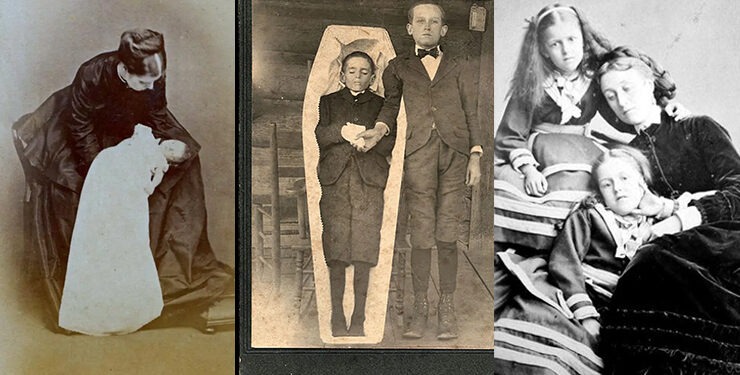 During the Victorian era, only the rich could afford to have their own portrait. Painting was considered a luxury item, so it was not available to ordinary people, and it was not possible to perpetuate the image of a family member or close relative.

Everything changed in 1839 with the appearance of the first photographs. A relatively cheap way to get detailed images quickly gained popularity. The main disadvantage of daguerreotype was the exposure time of the camera. The only copy of the photograph was obtained after 15-30 minutes of motionless sitting in front of the camera. Not surprisingly, most of the pictures turned out to be of poor quality. They were either blurry, as if a ghost was posing in front of the lens, or the person’s eyes were closed. Nobody wanted to pay money for bad photos.

Then people came up with a trick on how to take clear photos the first time: you just need to put a motionless person in front of the camera. The dead met this criterion. Thus, post-mortem photographs became fashionable and remained in demand for almost a hundred years.

Family photos with a secret

A mum places a tender arm around her deceased daughter in 1904. The teen’s eyes have been held open

The main clients of the photographers were parents who had lost a child. In the 19th century, infant mortality was high, and not everyone survived to adulthood. To perpetuate the memory of their beloved offspring, parents took pictures with a children’s corpse.

Thanks to makeup and special tripods, the dead looked like they were alive. They were put in chairs, giving a natural pose, put on their feet, fixed on special stands in an upright position. Less often, the dead were photographed lying in bed or on the couch. They put on festive clothes, did makeup, and, if necessary, drew eyes on their closed eyelids.

Soon people began to take pictures with other deceased family members: brothers, sisters, parents, grandparents. The mournful event turned into a real holiday, which the whole family was looking forward to. At that time, this was not perceived as something blasphemous or disrespectful: there was a completely different attitude towards death. It was believed that while a person is nearby, even lifeless, he belongs to the world of the living.

Surprisingly, in family photographs, the deceased sometimes looked better than their living relatives. And the uninitiated on the first try would hardly be able to guess where the dead person is in the group picture.