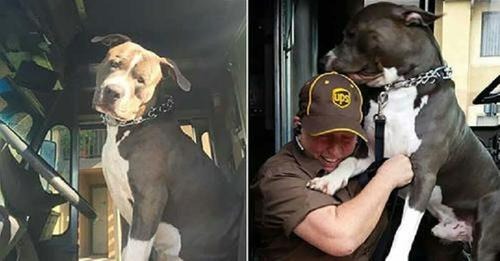 It was the subject of so many cartoons and comedy sketches, a mailman would approach a house and get chased off or barked at by a dog, but in reality, delivery workers make friends with so many of the animals they encounter every day.

The UPS Dogs Facebook page celebrates these friendships with so many stories of drivers who not only deliver parcels but treats and toys for these dogs.

One such driver Katie Newhouser loves all the dogs she encounters on her daily route, but it was one dog in particular that she fell in love with.

It was that special bond that would be called on when this lovable pooch found himself homeless.

Katie Newhouser loves dogs; not only does she have three of her own but also loves hanging out with all the dogs on her delivery route.

However, one dog held a special place in her heart: a pit bull called Leo. 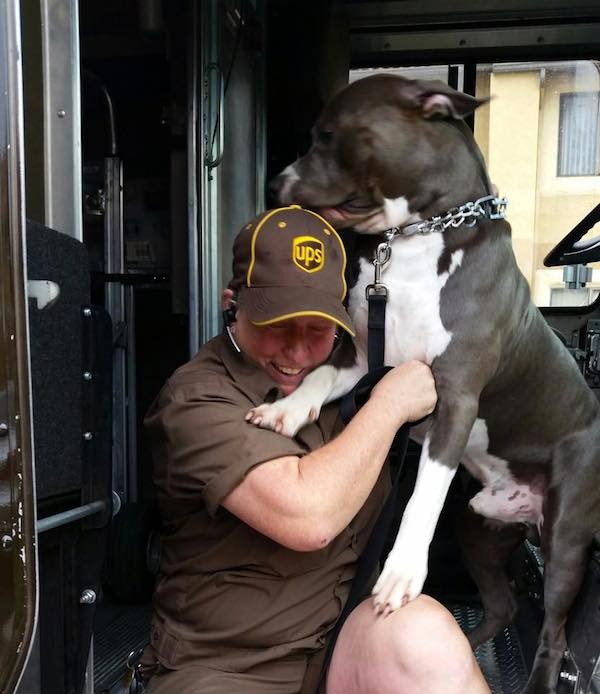 “He would always start barking as I pulled into the condo complex……He would always jump into my truck when I stopped,” Katie wrote in a Facebook post.

Katie even made friends with Leo’s owner Tina who told her that her son had found Leo when he was a puppy and he had to be bottle fed.

Katie received some devastating news
“They (Tina and Leo) were very very close and did everything together,” Katie told PEOPLE. “I don’t think that dogs ever forget anyone who they have been that close to.”

But Katie received some heartbreaking news in July 2017 when she discovered that her friend Tina, Leo’s mom, had passed away.

‘He and his brother Moose are inseperable’
Katie decided to adopt Leo herself, despite already having three dogs.

“It was probably confusing for him at first, [but] he has adapted well,” Katie said. “He and his brother Moose are inseparable. Bailey, his sister, has taken a while to come around, [but] they actually play now … once Leo was introduced into the house, the whole vibe changed.” 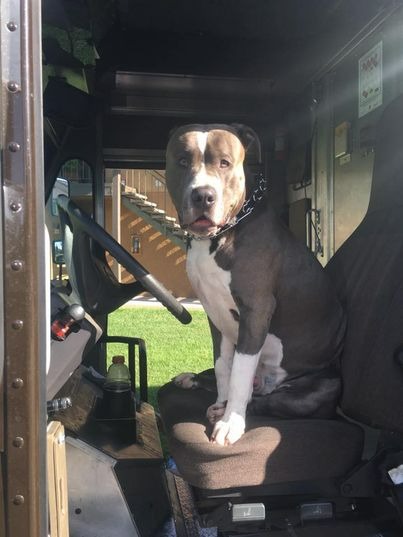 Even though Leo misses his mom Tina he was able to find a new home with someone who adores him.

Find out more about this adorable story in the clip below.

I’m sure this dog brings a smile to the faces of everyone he meets, he’s such a lovable pooch.

Please share this story and help put a smile on the faces of your loved ones today.