Excavators in Cyprus have discovered a series of “sensational finds” of death cult artifacts dating to 3,500 years ago, during the Bronze Age. A vessel used as a cult funerary object, a seal with cuneiform characters, and a scarab with ancient Egyptian hieroglyphs from the reign of Neferтιтi are among the “unique” finds made by a team of archaeologists at this bizarre structure dedicated to the worship of death.

Numerous death cult objects have been uncovered at a mᴀss burial site in Cyprus. Source: Peter Fischer and Teresa Bürge

A Center of Ancient World Trade and Commerce

In a recent GU.SE article Professors Peter Fischer and Dr. Teresa Bürge from the University of Gothenburg speak about the Swedish archaeological project “ The Söderberg Expedition ,” exploring the Bronze Age city of Hala Sultan Tekke on the west bank of Larnaca Salt Lake, in Larnaca, Cyprus. The approximately 50-hectare ancient city is located on Larnaca’s salt lake near the airport, after being abandoned around 1150 BC. But this story begins in 2017 when scans indicated cavities below the ground in an area east of the city with pᴀssages that led to burial chambers.

The expedition has unearthed 52 human skeletons and DNA samples were taken from the skeleton of a 30-40-year-old woman with a decorated ivory ʙuттon on her chest. Numerous grave goods were discovered in the tombs, including “the only known complete vessels from Greece from around 1350 BC” painted with detailed scenes of horse-drawn tanks and people wielding swords. Furthermore, a seal with cuneiform from Babylon dating to 1800 BC was found with a rare scarab from Egypt dating to 1350 BC. Another special discovery was a hemaтιтe seal dating from the oldest Babylonian empire between 1800 and 1600 BC, depicting carvings of gods, people, and animals. Dr. Fischer says the wide range of grave goods represents imports from “Greece, Crete, Turkey, Syria, Lebanon, Israel, Palestine and Egypt.” 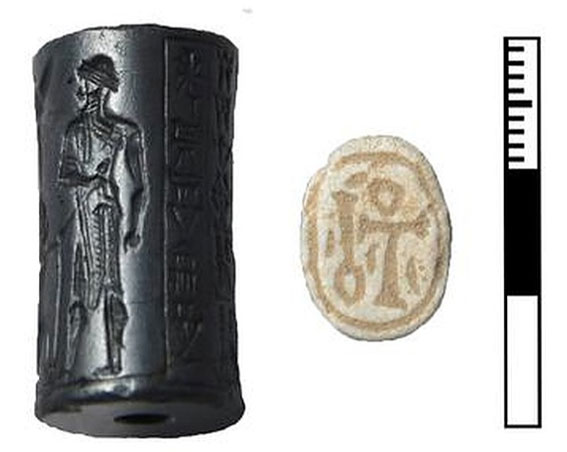 Babylonian seal (ca 1800 BC) with cuneiform writing and scarab from Egypt. ( Peter Fischer )

Chemical analyses of soil samples taken from around the 52 skeletons indicated that the people were “affected by parasites during their lifetime.” What’s more, “mortality among children and adolescents was very high” and the researchers said a 40-year-old person was one of the oldest people in the society. This chemical analysis also demonstrated vast quanтιтies of copper slag in the city, indicating large-scale extraction of copper, which in turn would have exposed people to toxic lead and arsenic particles.

The newly identified burial structure that the team of archaeologists began excavating earlier this year is considerably different from the other tombs at the site. Firstly, it features an underground dome covered with a thick layer of a plaster-like substance which is reached via a hallway from the surface. Furthermore, a 40 centimeter (15.75 inch) high reddish brown death “cult vessel” painted with elaborate patterns including the head of a ram was discovered, which the team believes was used in ancient burial rites . Dr. Fischer says this object was imported from Greece around 1400 BC and is “unique,” with nothing comparable ever having been discovered anywhere else.

Warehouse with vessels found in the second tomb during the excavation at Hala Sultan Tekke in Cyprus. ( Peter Fischer )

Piecing Together the Legacy of a Smashed Ancient Death Cult

Both sepulchral structures were active around 1500 to 1300 BC and the first grave, with 52 skeletons, was found to contain the skeletons from “10 generations of a very rich family, probably the leading stratum of the city,” said Dr. Fischer. Because of the presence of the “unique” death cult vessel and the large number of other ritualistic grave goods, the archaeologists are suspecting that this structure represents something very different from the average tomb.

The researchers think the structure was a place of community worship where sacred rites were performed in connection with deaths . 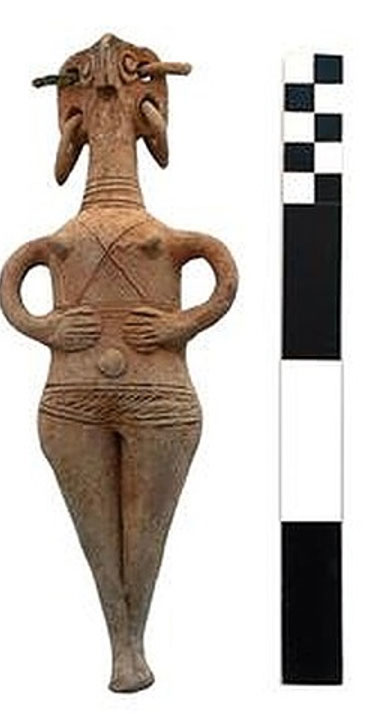 Ceramic figurine from the first tomb, locally made. ( Peter Fischer )

In conclusion, all of these new finds further establish Hala Sultan Tekke as an ancient Mediterranean trading metropolis, and the researchers say the grave goods demonstrate “unequivocal cultural and economic connections between the city and a large geographical area.”