They say that cats choose their humans, not the other way around, and we see this play out over and over again, writes blog.theanimalrescuesite.greatergood

If you’re familiar with cats, you probably know what I’m talking about. Sometimes they choose you, and sometimes they don’t – even if you’re the one giving them food, water, and a place to call home.
Around a year ago, a cyclist had a little kitten unexpectedly choose her as her new family.
It happened when a couple, Celine (@tartemadame) and Daniel (@cycling.dan), were cycling through the countryside of Brittany, France. They’re both avid cyclers and were enjoying their route when they suddenly heard a loud screeching noise. Celine shared on Instagram, “while out biking near a forest, @cycling.dan and I heard this screeching noise. It would have been hard not to stop and try to spot what it was.” And that’s exactly what they did.
After stopping their bikes, they began to explore to try to find the source of the screeching, and that’s when they discovered a tiny kitten on the side of the road.

Celine noted in the post that the kitten was “tiny,” “distressed,” and “hungry.” Poor thing!

Of course, they weren’t about to leave the kitten there to fend for itself. They knew they wanted to take it home, but since they were both on bikes, they weren’t exactly sure how to go about transporting the little feline.

They tried tucking the kitten into Dan’s jersey, but that wasn’t going to work for the long, 30KM ride home. Instead, they opted to finish their ride home as quickly as possible and return for the kitten in the car. 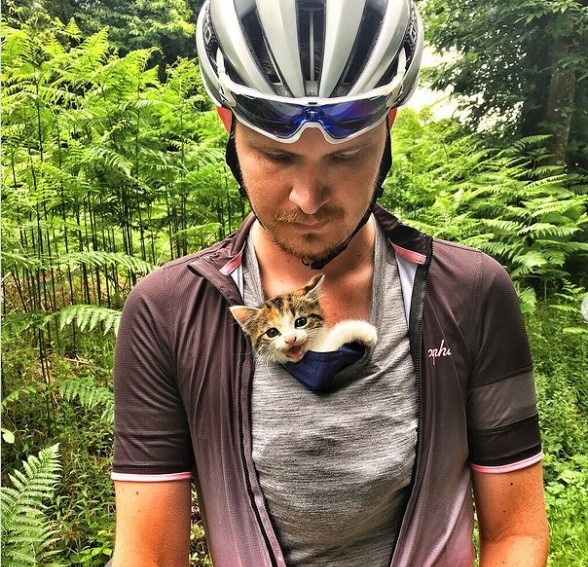 Thankfully, the little kitten was still in the bushes when they returned with a car for her three hours later. Celine said that as soon as she got out of the car, the kitten ran and jumped into her arms. Speaking with LoveMeow, Celine explained that the tiny cat was climbing all over her, clinging to her, and refusing to let go.

They ended up bringing the kitten back to their home and naming her Mini. It didn’t take long for Mini to settle in and feel comfortable in her new space.
Celine shared an update on Instagram of their rescue kitten just two months later and she’d grown a ton:

Daniel also shared a 2-month update, noting that the kitten “repays” them for rescuing her by giving them plenty of scratches. Sounds like the cat thing to do.
Mini has since celebrated her first birthday with Daniel and Celine and welcomed a new rescue cat and dog into the family.

It’s so nice to see she’s living her best life, all thanks to the kindness of Daniel and Celine.