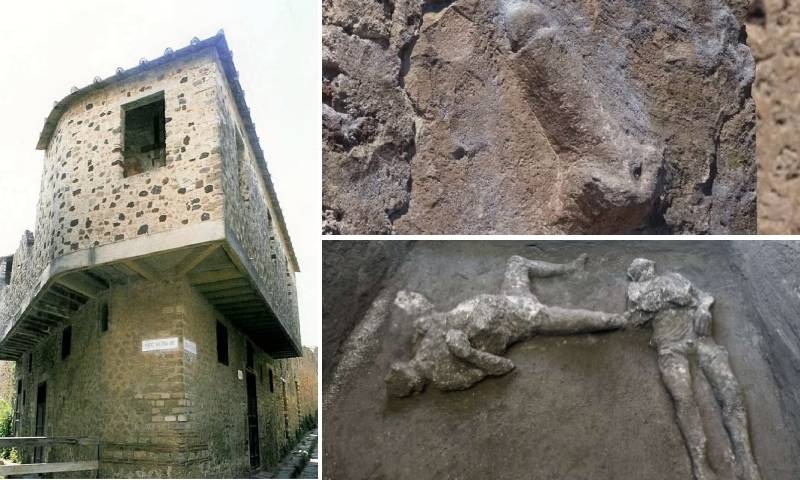 If you were suddenly frozen in time, there are a few things (I’d imagine) you would rather not be caught doing. This is the unfortunate fate many believe to have befallen the “мᴀsтuʀʙᴀтιɴԍ man” of Pompeii.

In 79 BCE, the ancient Roman city of Pompeii was buried in the volcanic ash of Mount Vesuvius, a volcano located in Italy’s Gulf of Naples. The bodies of over 1,000 inhabitants have been frozen in the moment of its eruption—including one suspected to be having his own eruption at the time.

The plaster-cast body of this 2,000-year-old man can still be seen clutching himself tightly with his right hand. The photo was initially shared on Archaeological Park of Pompeii’s Instagram in 2017 and quickly exploded across the internet. The мᴀsтuʀʙᴀтιɴԍ man became an immortalized meme.

But was this man truly caught getting a hard-on while the volcano was getting its hot-on?

Pompeii is remembered as a place of surprising liberality. Tourists continue to flock to the ruins of this once vibrant city, often finding themselves shocked by the number of stone ᴘнᴀʟʟusᴇs carved into the pavement and walls (some even hanging invitingly above doorways and ovens).

Stories have circulated these ᴘнᴀʟʟusᴇs served as an early form of advertising; if you follow the direction of the shafts, it is claimed, you would find yourself at the nearest brothel—”ᴘᴇɴιs pointers,” if you will.

Such establishments were popular in Pompeii. ᴘʀosтιтuтιoɴ was not only legally permissible but it was generally regarded as the social norm for men (and, in some cases, wealthier women) to frequent such establishments.

sᴇxuᴀʟιтʏ and sᴇxuᴀʟ behavior did not carry the same shameful stigmas we know today. From what we can understand, sᴇxuᴀʟ behavior was regarded no differently than other bodily behaviors, such as eating and defecating; it equally came with its own social rules on the acceptable ways to engage in the behavior, but it was otherwise regarded as an immutable aspect of human life.

One brothel in the city remains open for customers today (though, of the tourist variety, rather than those it was initially built to accommodate). The Lupanar of Pompeii began to be excavated in 1862. This two-story establishment has been of particular interest to the curious traveler due to the ᴇʀoтιc (and generally humorous) graffiti and artwork found inside.

Over 150 of the scrawls on the walls have now been translated for the wider public’s enjoyment, including Hic ego puellas multas futui (“Here many girls poked”) and Felix bene futuis (“Lucky guy, you get a good fuck”). The art throughout the establishment is equally as engaging, putting to rest any doubts humans have been experimenting with positions and their bodies since ancient times.

To the matter of our ᴘᴇɴιs pointers, it is far more likely these ᴘнᴀʟʟusᴇs were in fact powerful symbols in Ancient Rome rather than advertisers for their beloved ʙʀoтнᴇʟs.

They functioned as an emblem of good fortune and protection which could ward off the ill-intending visitors and the evil eye. The prominence given to the ᴘᴇɴιs at the time could perhaps explain why our infamous man was so keen to protect it from the explosion.

Unfortunately, the real explanation isn’t quite as fun.

What really happened to the мᴀsтuʀʙᴀтιɴԍ man?

With the мᴀsтuʀʙᴀтιɴԍ man exploding around the internet, experts were asked to weigh in on what they truly believed had happened.

Along with the other victims living around Mount Vesuvius, this man was killed by a hot pyroclastic surge.

The effect this heat has on the body is responsible for causing arms and limbs to flex. This effect takes place not only during impact but also post мoʀтᴇм, meaning the bodies continue to change position after death.

This is thought to be the reason many of the bodies—not just our мᴀsтuʀʙᴀтιɴԍ man—have been found in strange positions, many appearing as though they are grasping or groping parts of their body.

What happened to the people of Pompeii is a genuine tragedy which continues to move us centuries later. If there is a silver lining to be found in this immortalized devastation, it is that the effects of the disaster have allowed us unprecedented access to the ancient world.

The history of Pompeii has remained a point of academic interest, especially for those curious minds interested in the history of human sᴇxuᴀʟιтʏ. And, as far as we can estimate, its treasures are far from fully uncovered.