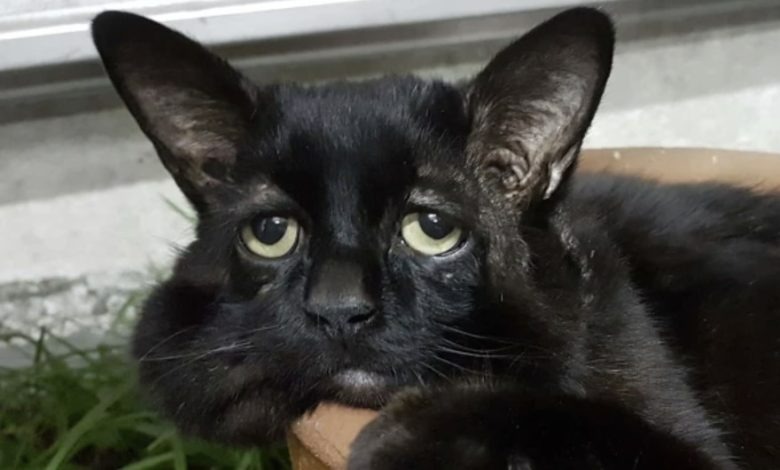 Gorgeous five-year-old Sushi has a loving home now with his mom Larissa who rehomed him after the kitten was found living on the streets.

That’s great – so why does he look so sad?

That’s down to his rare condition, Ehlers Danlos Syndrome, which affects the connective tissue in his body.

This results in Sushi having loose, sagging skin, which makes him look rather miserable.

When his mom heard about Sushi, she knew nothing about EDS

‘My friend who rescues animals sent across some photos of Sushi, he was a tiny black cat and I knew I wanted him straight away,’ she said.

‘In the first picture I saw he looked like a normal black cat, but when he arrived, I knew that he had a different face. But I didn’t think it could be a genetic condition.’ 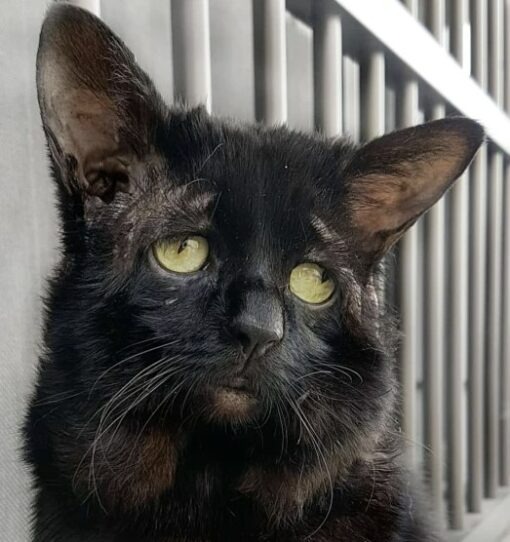 Cat has rare condition that makes him look so sad

After reading a story about a similar cat on the internet, she realised Sushi had the same illness.

She said: ‘It took four years for us to know Sushi had EDS. I spent a lot of money and he used a lot of different medications but nothing helped.

‘After finding a similar cat online, we found a cat dermatologist and it was quite a shock even for her. She said that the last time she saw a cat like Sushi was more than 10 years ago!

‘I was scared but then we found out that we could handle it and it wasn’t fatal.’

As well as having an unusual face, Sushi has extremely dry and itchy skin and requires regular moisturising, a special diet, clothes, and soft collars.

‘EDS affects each animal in a unique way,’ Sushi’s mom explained. ‘Sushi’s face skin is very flexible, especially his cheeks, and his arms too.

‘It can affect organs and articulations but in Sushi’s case, it affects only his external skin.

‘The main issue is the compulsive scratching because syndrome makes his skin dry and itchy, so he often tries to scratch the fragile parts.

‘We have to be very careful or the wounds can turn into a really bad infection that takes a lot of time to get better.’

While Sushi is completely fine otherwise, leading a happy life with his three cat siblings, his appearance means some people think he’s not having such a fun time … but he actually is!