Sadly, pit bulls seem to attract the owners who mistreat and abuse them, leading to them getting a bad rep for being aggressive and hostile around humans.

But here, we’re on a mission to prove that if brought up with the love and affection they deserve, pit bulls are actually the sweetest, most gentle dogs you will ever come across.

Everly lives with her mom, Morgan Joy Groves, and her cat sister, Belle. She loves nothing more than cuddles with Morgan, and she can often be seen following Belle around so that the pair can nap together.

Back when lockdown first began, Everly was enjoying the extra time she could spend with her mom when someone else caught her eye. 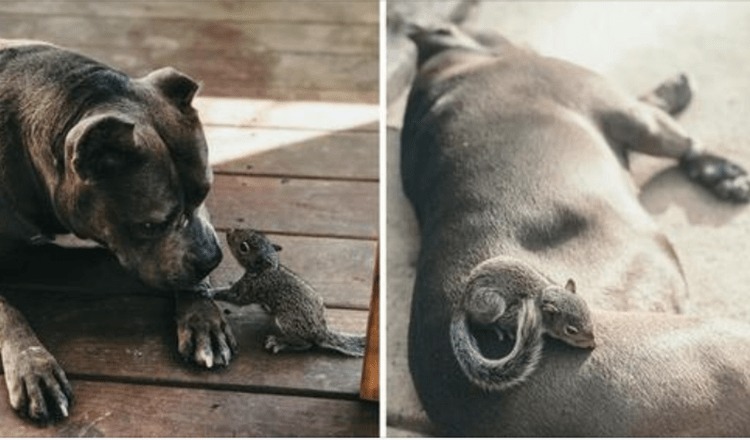 The squirrel had appeared on Everly and Morgan’s regular walk, and she seemed to be instantly taken with the gentle pit bull. It appeared that the poor little guy no longer had a mom of his own, and he had instantly chosen Everly as his adoptive parent.

Everly seemed surprised by the attention she was getting from this little squirrel, especially when he decided to follow her and Morgan back home.

As she laid out on the porch to rest after her walk, the squirrel seemed intent on staying by her side.

The squirrel seemed to be missing the warmth of its mother, and climbed right on top of Everly’s back! The pair fell asleep together, and Morgan snapped the most adorable picture we’ve ever seen in our lives.

As the sun streamed in, the squirrel was splayed out on Everly’s back as if he was trying to catch a tan. It’s clear that he feels totally comfortable around Everly!

Belle the cat was very skeptical of the squirrel that now seemed to be a part of the family. She was used to chasing squirrels, but she took the lead from Everly and refrained from seeing the baby as prey.

As the days passed, Everly began to take her mothering role more and more seriously. The pair always cuddled up together for nap times, and Morgan spotted Everly grooming the tiny squirrel on more than one occasion.

“Everly has such a special talent of always being able to make new friends,” Morgan commented on Instagram.

Did this mean that the squirrel was now a permanent addition to the family?

Caring for a squirrel is much more difficult than it looks, and although it was going to be heartbreaking to take away Everly’s new friend, Morgan knew that she had to do what was best for the baby squirrel.

“Our little squirrel friend was brought to a wildlife center where it will be nourished and taken care of,” Groves posted on Instagram. “There are two other squirrels his age that he will grow up with, and when ready, be released back into the forest together as a family!”

It’s great that the baby squirrel is going to be given the proper care he needs, and we’re so glad that he’s no longer going to be by himself.
As for Everly, she has her kitty sister to hang out with!

Belle and Bev also aren’t the only cute squirrel and dog duo on the internet. Take a look at some more sweet dog and squirrel friends below!