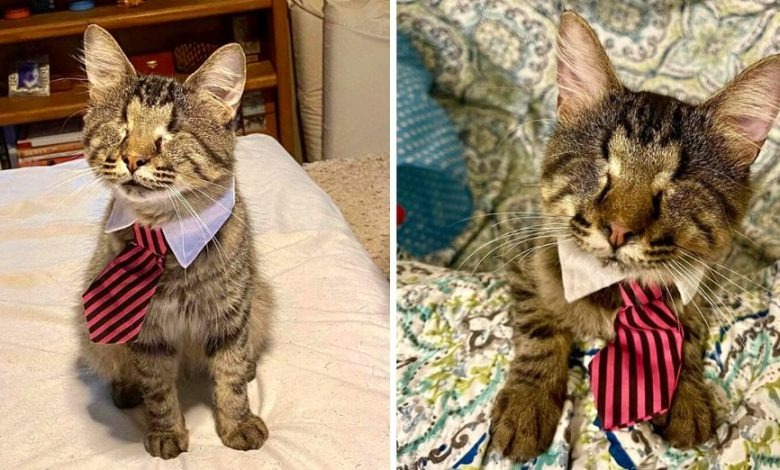 Mike was about to be attacked by a rogue dog when a kind rescuer rushed him to safety. 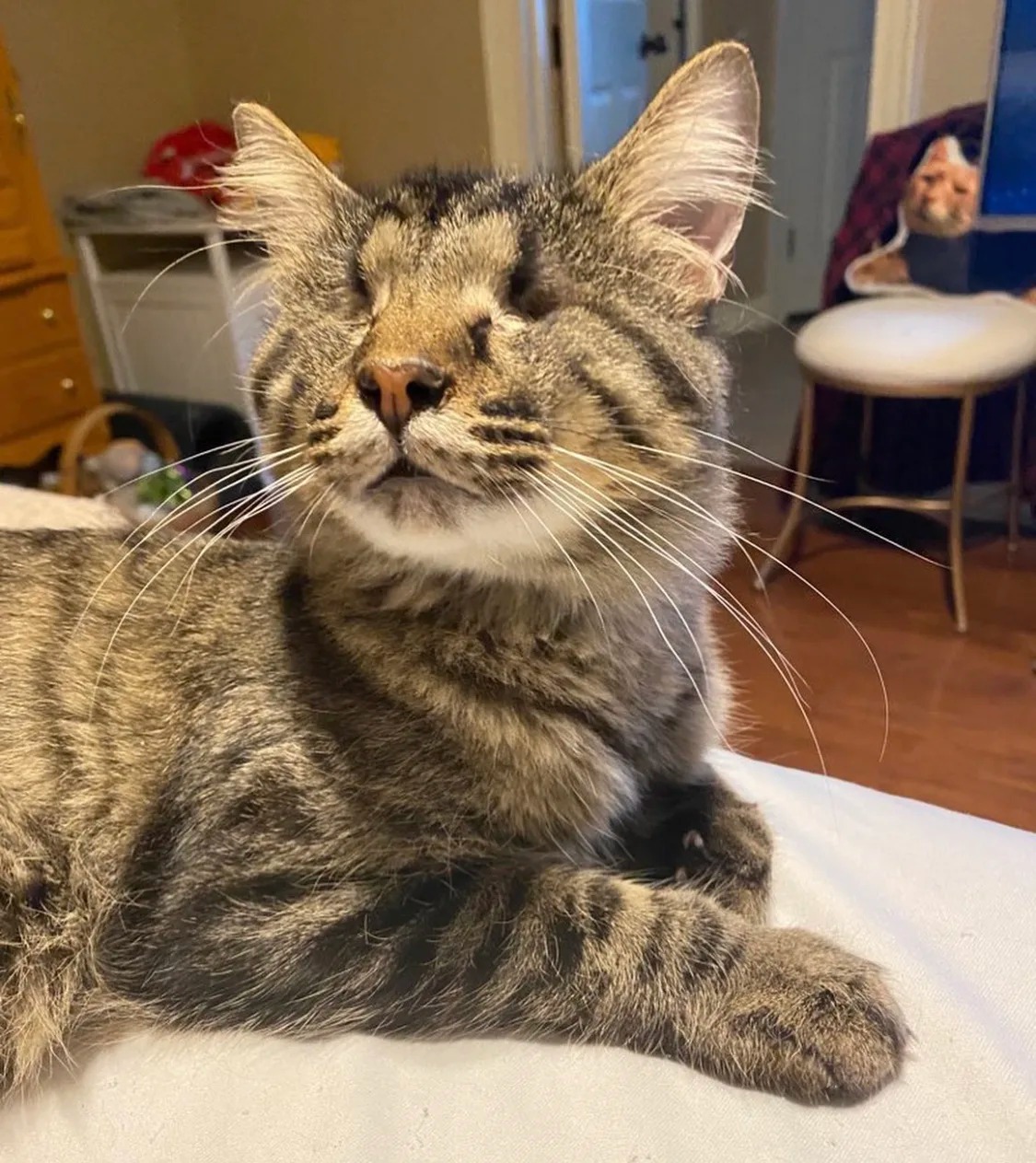 Keep reading to discover how Mike escaped a tragic fate and lived happily ever after!

A Disturbing Call
Sarah Richardson of Community Cats of Central Arkansas received a call from fellow rescuers one day with disturbing news.

“A shelter in Eastern Arkansas was being closed down due to speculated abuse and neglect,” Sarah recalled.

A small group of Arkansas rescues had joined forces to help rescue to hundreds of animals at the shelter.

Sarah was asked to take most of the shelter’s cats under very short notice. 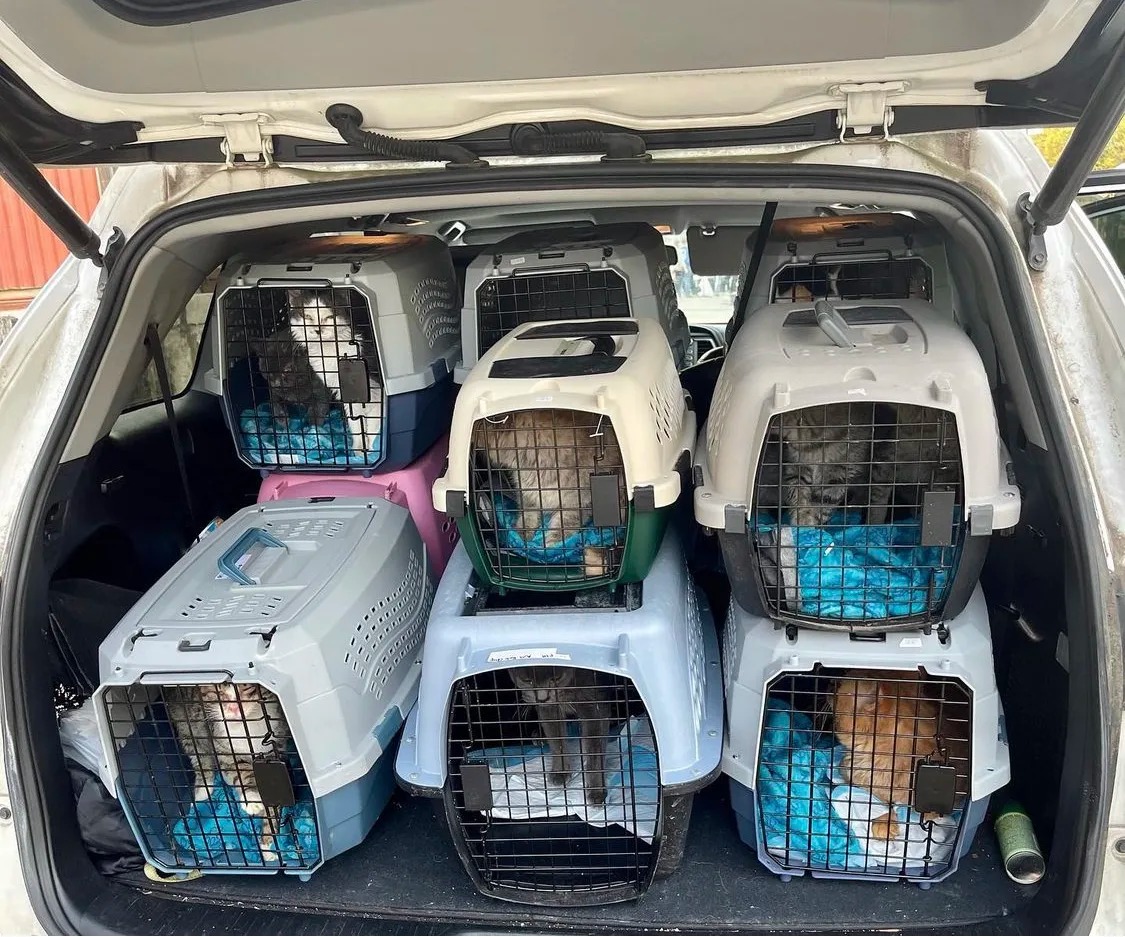 “They didn’t have anyone to take the cats,” said Sarah.

When Sarah arrived at the shelter, she was horrified by what she witnessed.

A Shocking Discovery
“Hundreds of cats and dogs were roaming the property. The ones that weren’t loose were stacked in kennels,” Sarah recalled.

Mike had been roaming the property when a leashless dog attempted to attack him.

Mike was taken to the shelter’s cat room, but he was still in danger.

The cat room was a disaster– it had holes in the walls, ceilings, and roof.

Cats were hiding in every nook and cranny of the room in a desperate attempt to survive.

The only way the cats could eat was by getting out of their kennels and risking their lives to look for food or water amongst the dogs.

The shelter had completely neglected their animals, leaving them to fend for themselves.

Poor Mike was at a disadvantage because of his blindness.

He wouldn’t survive much longer in these conditions.

Rushing to The Rescue
Sarah intended to make multiple trips to the shelter to transport all 100+ cats, but she knew Mike needed to come home with her that day. 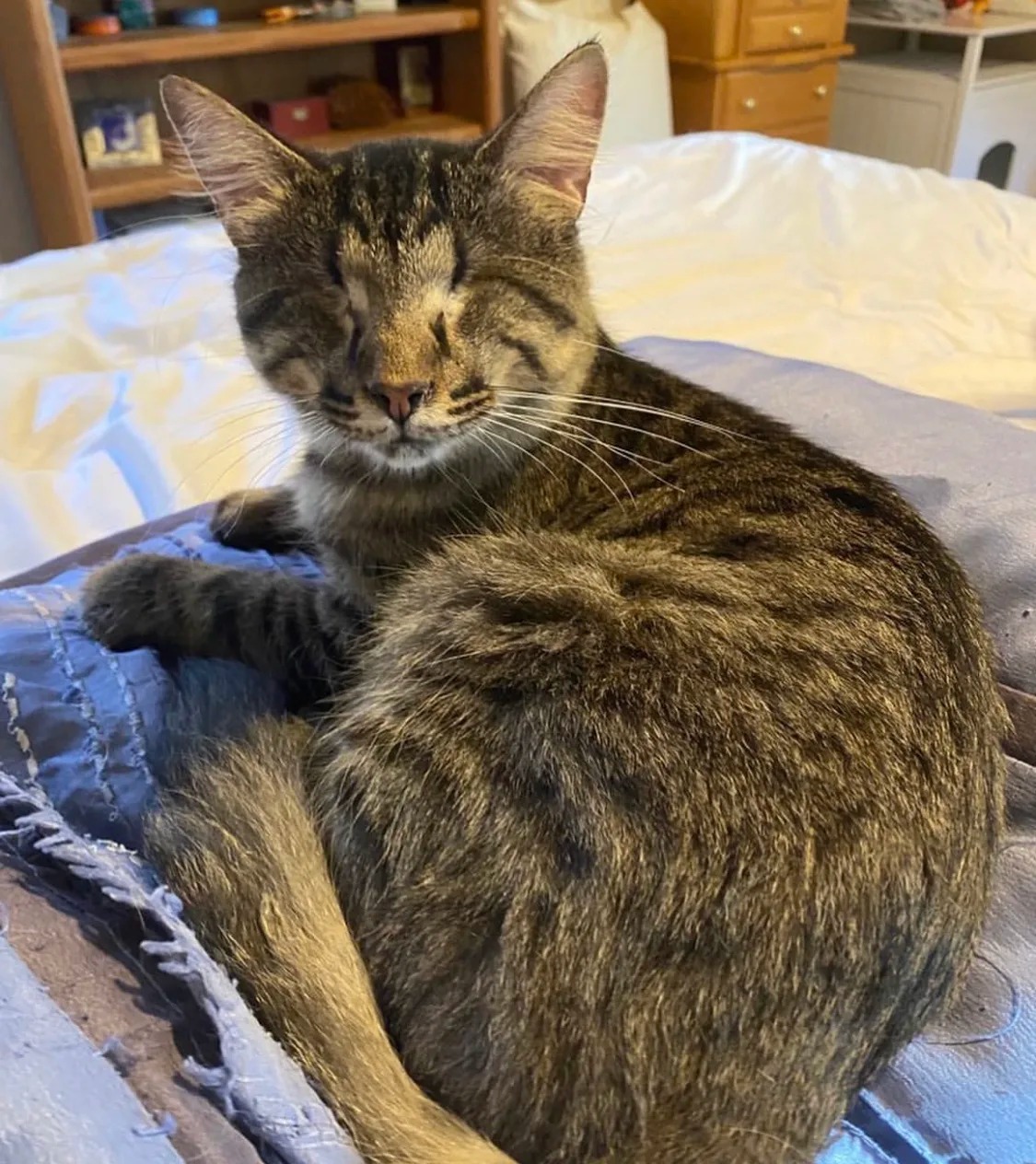 “He couldn’t wait. We brought him home immediately,” said Sarah.

However, getting Mike home was only half of the battle.

Once Mike was safe in Sarah’s home, it was time to address his health concerns.

He had an upper respiratory infection, severe diarrhea, and trouble breathing.

Despite how much Mike was suffering, he still found it in his heart to love and trust his rescuers.

“He’s the sweetest cat you could ever dream of. All he wanted was to be loved and held,” said Sarah.

It’s almost as if Mike knew he’d been rescued and wanted Sarah to know how grateful he was.

The Road to Recovery
Like most special needs cats, Mike was incredibly intelligent and adaptive.

He worked hard to navigate his foster home, relying on his sense of smell and sound to find his way around. 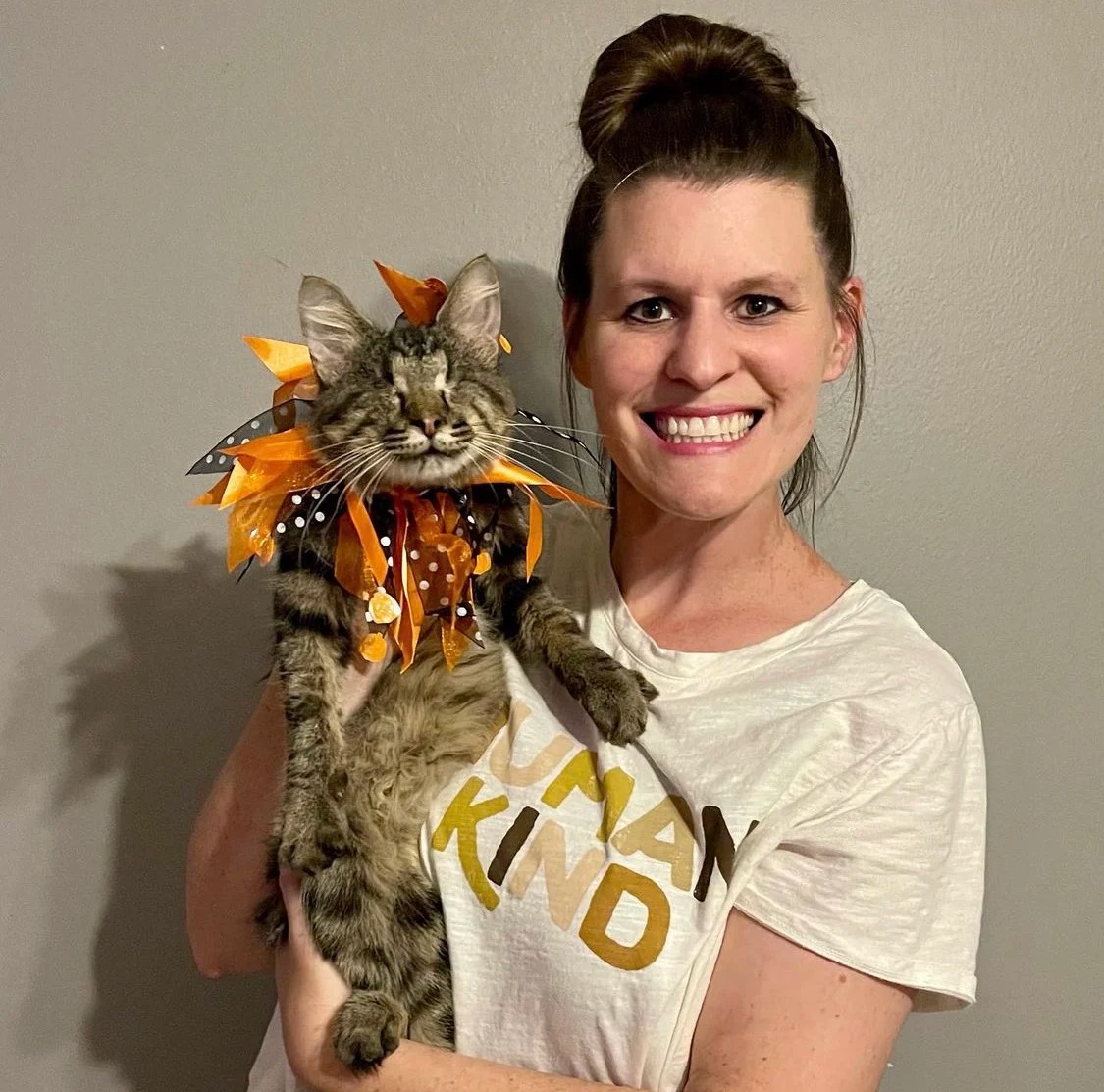 He couldn’t afford to make mistakes in his previous living conditions.

Mike received fluids to address his dehydration and started on antibiotics and parasite treatment.

He took all of his medicine like a champ!

Soon, Mike was perking up and his true personality started to shine through.

Sarah posted updates and shared each of Mike’s victories on social media.

One day, Sarah received a heartwarming message about Mike from a kind individual.

Two Peas in a Pod
“One of our fosters has a blind cat missing both eyes. They volunteered to foster Mike and adopt him if everything went well,” said Sarah.

After a month of diligent care, Mike was healthy enough to be fostered by someone else.

He arrived at the foster’s home and never came back!

“Mike made himself right at home,” Said Sarah. “He loves his new family!”

Now Mike will never have to worry about being attacked or abandoned outside ever again.

He lives a life of luxury indoors where he’s taken very good care of. 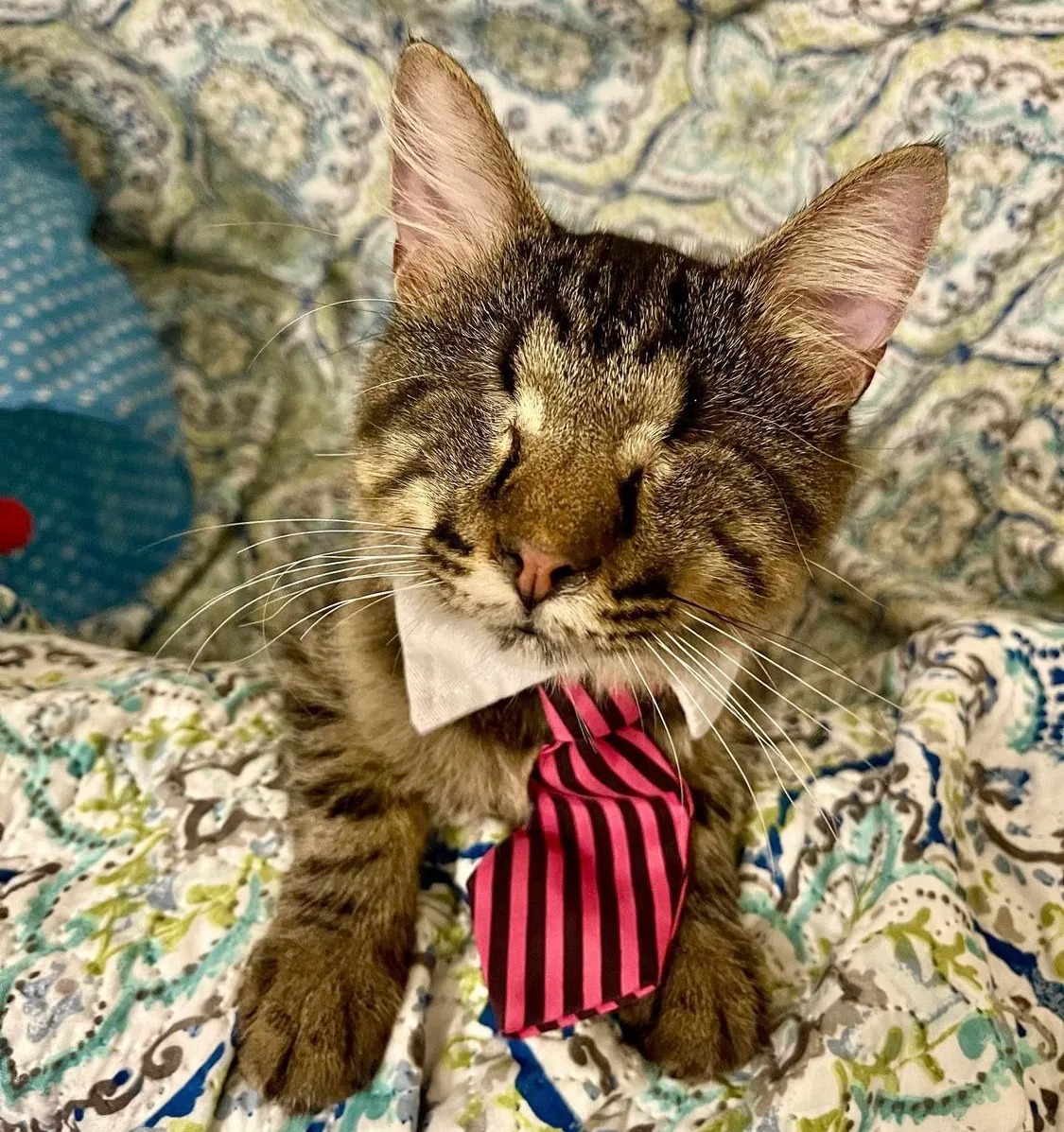 He’s surrounded by people who love him and enjoys the companionship of his new cat sister, Molly.

Molly is also missing both eyes, making this adorable pair two peas in a pod.

She took little Mike under her wing, giving him a warm welcome as his new big sister.

Despite Mike’s happily ever ending, his road to recovery isn’t over.

The shelter was filthy and infested with vermin “bigger than the cats themselves”.

Mike’s condition is so unusual that not even the vets are able to diagnose him at this time.

“The vets are still trying to determine what bacteria he has,” said Sarah. “He’s scheduled to see a specialist very soon.”

Sarah Richardson is one of the few rescuers in Arkansas that rescues and rehabilitates senior cats, hospice cats, and injured cats in critical condition.