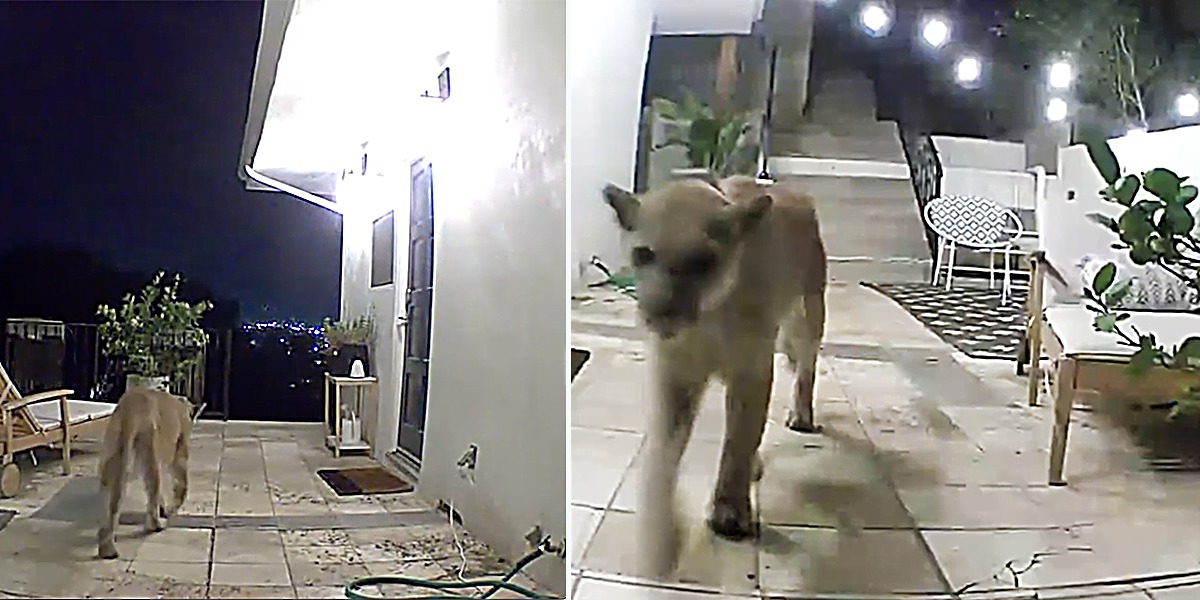 Living in the Hell’s Kitchen neighborhood in New York City, Kevin Prince rarely saw wildlife. And when he did it was usually a sizable rat grappling with a slice of pizza. So of course it was a big change when he moved to the Hollywood Hills neighborhood in Los Angeles, California.

Los Angeles Has A Really Wild Side
Because the wildlife he discovered in California put an entirely new spin on the word “big.” As in big cat. Namely as in P-22, a mountain lion that calls the area where Kevin lives home. And who especially likes to visit Kevin’s home.

In the clip below, we see the mountain lion cautiously padding around on Kevin’s patio and the National Park Service has since confirmed that this is, indeed P-22. Kevin says his four-footed neighbor has made four visits in the last year-and-a-half.

Images and video via Instagram/animalsatmyfrontdoor

The huge, tawny cat visited Kevin’s garden early on when he had just moved into the neighborhood.

“About a weekend into moving here, I got home one night, parked in my carport, and I looked up the steps into my house and I see what I think is a golden retriever,” Prince tells the Los Angeles Times.

I wanted to find out more about Kevin’s experiences with the big kitty, so I chatted with him on Instagram. Discovering such a wild houseguest was definitely “very surprising,” he tells me. Then he saw P-22 walk and it was just like watching Mufasa, from The Lion King.

Embracing The Big Cat In The Garden
Like most people, the big cat made him a little nervous in the beginning. But he did his research on how to keep himself safe and when he leaves the house, he makes sure to check his motion alerts or sometimes looks out his window, “but I’m not scared, he told The Times. I think it’s a beautiful creature and we should embrace P-22.”

“At first, I was scared, but quickly did some research and found him to be beautiful and majestic,” he tells me. “I’m lucky.”

He momentarily thought the big kitty had escaped from a zoo, but the research soon revealed this was indeed P-22. Wanting to know more about this beautiful boy, he installed motion-controlled cameras on his patio last year. As you can see below, Kevin’s videos aren’t disappointing. In the clip below, we see the inquisitive guest prowling the patio, and in the clip that follows that one, we see P-22 sniffing his surroundings.

He notes that P-22 has been nicknamed “The Brad Pitt of Mountain Lions.

“He lives in the Hollywood Hills and is aging gracefully and he’s handsome AF.”

Indeed, P-22 is one gorgeous mountain lion. But then they are all beautiful, aren’t they?

And this delightful big cat isn’t the only visitor Kevin receives. In the clips below, we see opossums, skunks, rowdy little California ground squirrels, and even the occasional coyote. 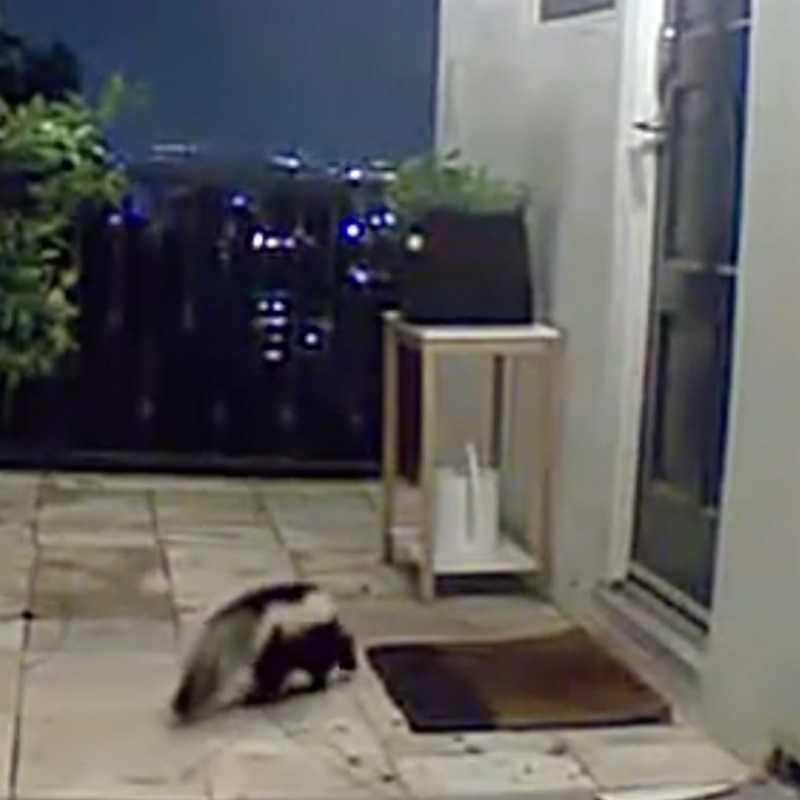 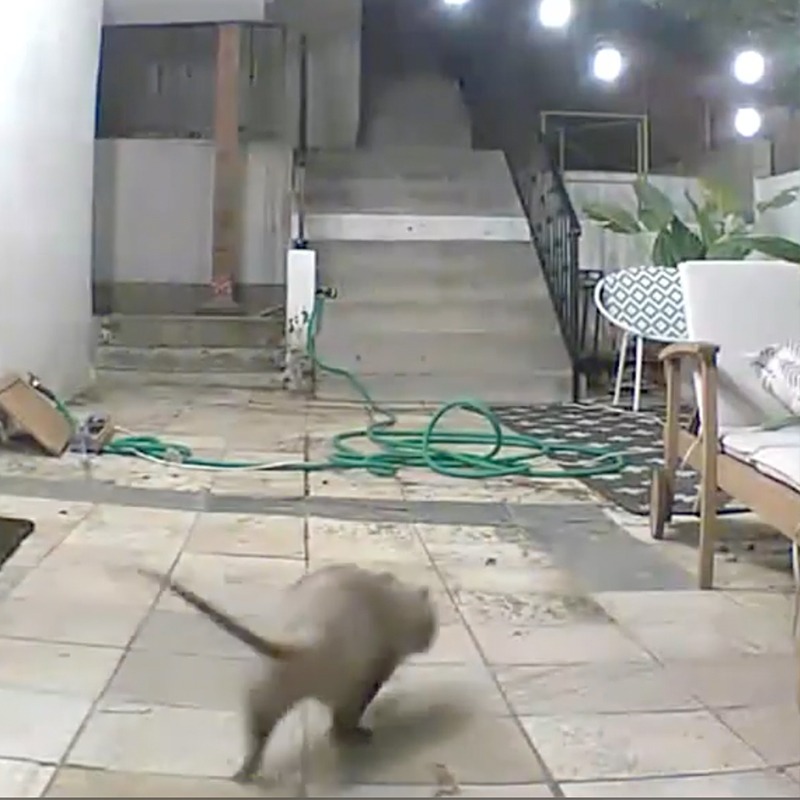 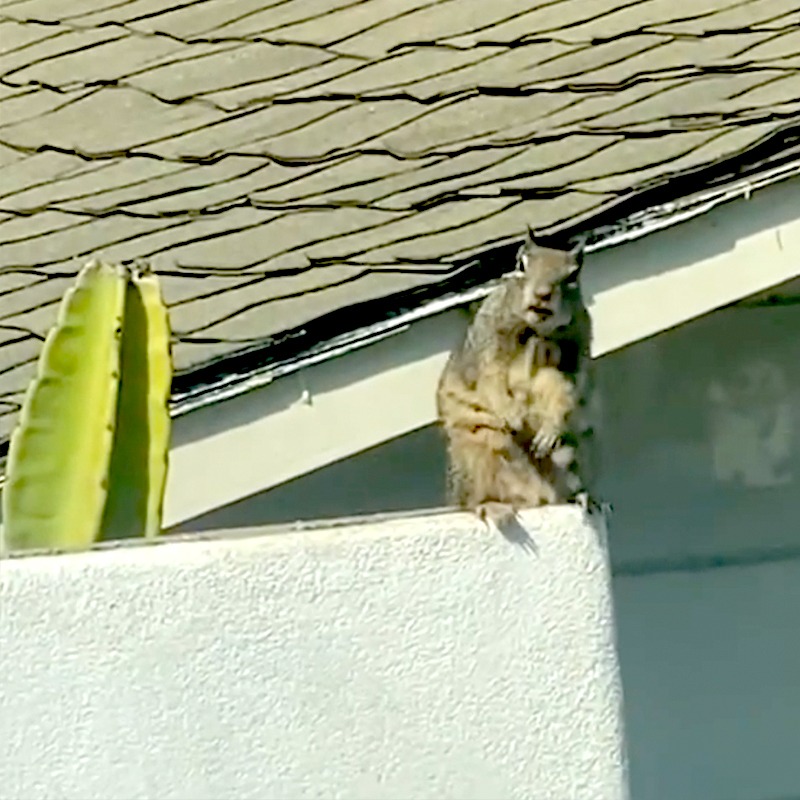 P-22 has only made a few pit stops to Kevin’s garden in the Hollywood Hills but the recent New York City transplant says he is always happy to see his wild friend when he has the chance. He checks his Blink cam daily.

It seems Kevin and P-22 have made their own amazing journey. The Guardian reports the big cat’s amazing trek to his current home in the Hollywood Hills began in 2012. P-22 set out on his own, on an amazing 50-mile journey where he crossed two major Los Angeles freeways, luckily avoiding traffic and humans, making his way to the Griffith Park area and the Hollywood Hills.

P-22 Is A Beloved Resident In Los Angeles
This remarkable cat has called this area home for over a decade now. He’s a celebrity in the City of Los Angeles and he now presides over the 4,000-acre park tucked inside the Hollywood Hills. This is a small amount of territory for a male mountain lion, at just eight square miles. They typically need 150 square miles, The Guardian reports. Fortunately, the beautiful cat seems to be doing just fine. He’s inspired murals, and songs, and his life has been featured prominently in an exhibit.

For many people, P-22 has come to symbolize Los Angeles, a city that is somehow full of forested chaparral and densely populated urban areas that seem to fit together.

“A city long bashed for being a concrete jungle full of smog proves the world wrong by making a home for a mountain lion,” Beth Pratt, California Director for the National Wildlife Federation tells The Guardian. Pratt even has a tattoo of the famous cat, and she’s the person who favored him with the “Brad Pitt” nickname. 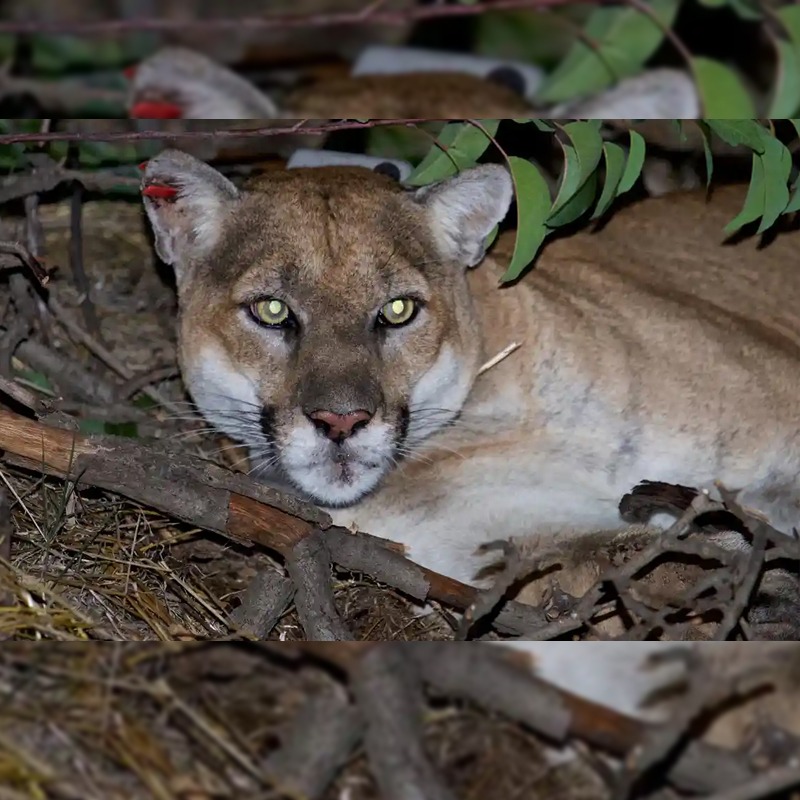 California Sensibilities Keep P-22 Safe.
She notes that in any other part of the country, P-22 would more than likely be removed or killed. While this means he’s very lucky to be here, his situation is also bittersweet. Here, he has plenty of deer for food and no other competition from male lions but he has no hope of finding a mate. This is certainly sad news but at least there’s this: According to the California Department of Fish and Wildlife, lion populations in California are stable and it’s estimated there are at least 4,000 to 6,000 of these cats living in the state.

The Guardian notes this beloved cat has never posed a threat to anyone. Prince knows he’s lucky every time he gets to see this wild cat. I hope that California can continue to be home to these cats for centuries to come.

Recent sighting of P22 in Silver Lake via KTLA 5: